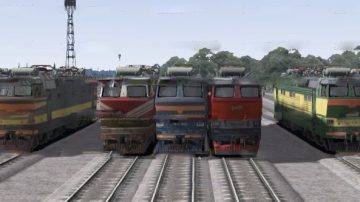 The six-axle electric locomotive CHS4T is the main type of passenger locomotive for lines electrified with alternating current of 25 kV. The first experimental electric locomotive, ChS4T, was built by the Czechoslovak Skoda plants in 1971, and then after making minor changes to the design, the ChS4T electric locomotives (factory type 62E) were built by this plant in 1973-1974, 1977-1985. and the beginning of the twelfth five-year plan.

The next version is EXPECTED!
1. Using native sounds for chs4t
2. Zadekanie 3D textures of water droplets in the driver’s cab!
3. Installation of lighting on the control panel in the cabin.
4.Fixes and flaws in config files!
5. Improvement of the script under the signaling ALNS!
6.If the authors allow, lay out the CS4t cabin with CLUB – M!
7.A also needs help in mastering the script for writing the CLUB-M signaling