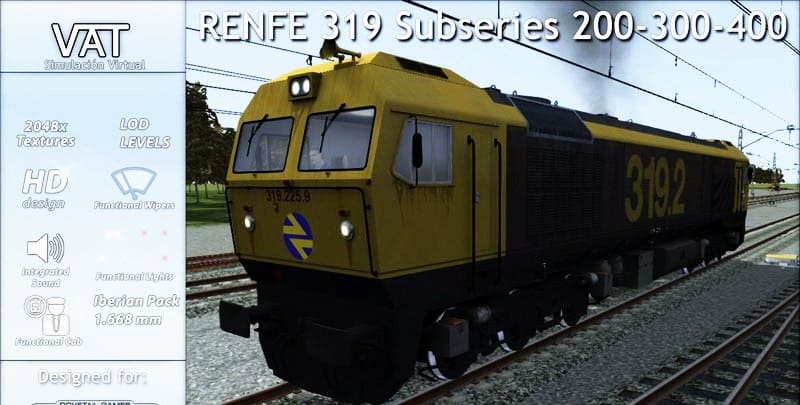 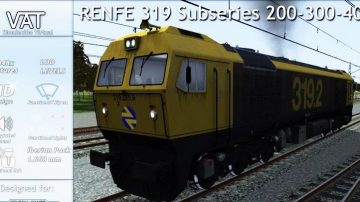 The 319 series Renfe (originally 1900) was originally a series of diesel-electric locomotives manufactured in the 1960s by MACOSA and General Motors, GM remains the engine manufacturer CV 1977 that allowed this series have a maximum speed of 120 km / h. The original series featured 103 units were delivered between 1965 and 1972. The original design of the series was very similar to the 321 series Renfe, although 10 units had an American design with a single cabin conduccción.

Reformed Subseries
319-200 double traction with design “patchwork” with three windows front and back. Bridge over the Congost. Railway ballast for the renewal of the Ripoll-Ribes de Freser line. September 2007.
Since 1980 this series began to be scrapped by the poor performance of the machine. As the engine performance was very good it was decided to keep this and some other components. Thus in 1982 MACOSA RENFE awarded the construction of 20 new locomotives that took advantage of some components of the original series, so the new series more than reforms are to be considered as new locomotives.

After the proper functioning of these first units, of 319,201 to 319,220, called remnants and different from the rest of the new subseries front, 78 locomotives were requested, where the engines were improved and some technological components that were included They improved the performance of the locomotive. Some units of the new locomotives were ready to run at a maximum speed of 140 km / I even have some bogies to circulate in UIC by the LAV.

Subseries 200
Close up of the locomotive 319 205 Renfe, “Patchwork” original decoration of Manresa Station. March 2009.
Delivered between 1985 and 1991 in this subset there are three differences, the first 20 units have front with three crystals, they are called remnants, the following 28 have definitive exterior design of the rest of the series, with front two cristlaes and 10 latter are brand new, and not exploit any part of the original series. This subseries is prepared for the transport of goods and its top speed is 120 km / h. The weight of these is the smallest of the 3 renewed subseries, with 110 t.

Subseries 300
Subseries 300, have certain improvements on subseries 200, because the engines were improved, offering these (GM 16-645-C) 2230 hp. This series is especially prepared for passenger traffic, brings heating for the train and its top speed is 140 km / h. The 40 units of this subseries was delivered in 1991 and 1992.